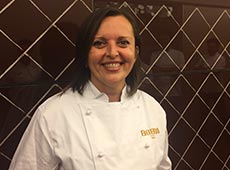 Always endowed with great inventiveness, dexterity and versatility, she began her career as a fashion designer and then graduated in History of Art, although her real passions have always been cooking and pastry, fields in which she loves to experiment and create new recipes and suggestions.

Her gelato making skills are refined thanks to the fact that, until 2015, she was the partner of a distributor of products for traditional Italian gelato: she participated in several training courses at the best companies in the sector, and then became her company’s senior cold pastry chef, in addition to dealing also with the commercial aspect in certain areas.

Her great enthusiasm and strong skills of empathy in recent years have led her to specialize in assisting customers during the opening of new premises, training staff in making semifreddi, single portions and window decorations.

Her creativity is also requested and appreciated by customers during the creation of gelato cup menus and in the search for new taste combinations, mainly linked to the seasonality and the specific characteristics of the territory.