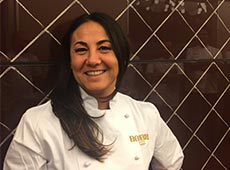 The beginning of her career dates back to the ’90s with the opening of a Gelateria in Sardinia. An innate passion and an infinite curiosity prompted Lucia to continuously seek “perfect recipes”, spectacular presentations of the product on display, new suggestions of semifreddi and single portions.