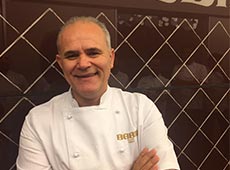 Since 2011, he has been a trainer and instructor of the Babbi team, and with passion and delicacy he conveys to all those who meet him a deep dose of love for the pastry and gelato business, as well as comprehensive technical expertise.

In 1975, Angelo Musolino began from a very early age to support his two older brothers in the pastry laboratory in Reggio Calabria. In 1985, after a decade of learning, he opened his own gelateria, LA MIMOSA, in downtown Reggio Calabria and, since 1995, he has been engaged in association activities, first at provincial level, then on a regional and national scale, soon becoming regional coordinator of the Calabria association of pastry chefs.

Expert confectioner, trainer and demonstrator are his peculiarities and, in addition to being part of regional and national teams for different competitions, after a few years he become a member of juries for national and international competitions and events.

The courses helded by Angelo Musolino