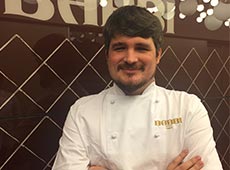 Thomas is the resident Babbi Gelato and Confectionery chef in Asia.
Thomas is also the official Babbi Ambassador in the world of Gelato in Asia and the Middle East.

After having opened 2 gelato shops in Venice in 2005, Thomas, who has always been fascinated by the Asian world, where he has travelled and worked for many years, moved to Bangkok for good in 2012 and started opening several food businesses in Thailand and India. He currently owns a successful pastry shop in Bangkok and is also a Babbi consultant in the Asia Pacific region for training, technical support and providing advice to customers and distributors.