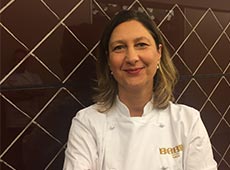 After having attended several training courses during the first years of work, she become an integral part of the Babbi technical team in 2006, establishing herself in the limelight in Italy and abroad by holding fairs, demonstrations, courses and opening new outlets.

Simona LEONI joined the world of gelato with her sister by starting her own traditional Italian gelateria, Gelateria SIRIO, in Rimini in 1997.

Creative in making gelato cups and semifreddos, both in single portions and for slicing, she is an outstanding trainer in the broadest range of activities that can be carried out in a gelateria. Multifaceted at work, she manages to convey a great serenity and a winning method to those who must learn the trade. She is successfully engaged with Babbi mainly in Italy and in Spanish-speaking countries.